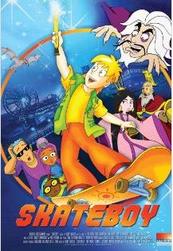 Skateboy has a strange history, perfectly befitting a story that is itself a strange and comic fantasy.  In this particular case, it's a series of animated movies for DVD, adapted from the TV cartoon series, Flute Master.  (I always preferred the original name, but when it came time to release the DVD movie versions, thems what knows better found that kids like skateboards a whole lot more than they do flutes.  Go figure.)  I co-wrote three of the DVD movies, and also wrote five of the TV episodes.

The TV series was created by the inspired mind of Barry Glasser, who also put together the movies.  And it, in turn, is based on a live-action screenplay he had written several years before.  (Among many other things, Barry also wrote the live-action feature film, Gold Diggers, and co-wrote the upcoming animated feature, Dorothy of Oz, to be released in 2013.)  The series was shown on television just about everywhere around the world, in fact all except for just one territory.  Alas, that single territory was the United States.  Such are the whims of trying to find a spot on a crowded, but limited animation dial.

Turning the TV show into DVD movies, however, was particularly appropriate, compared to most such productions, since the series had a complete storyline told over the course of a season.  And since the original source material told a single story.  As a result, when the DVD movies were made, each one was a self-contained tale that stood on its own, but which pushed the overall story forward.

The story tells the adventurous tale of a teenage boy who becomes the unlikely heir to a powerful legacy -- the ability to command a fleet of mythical creatures awakened from a sorcerer's spell after 3,000 years. Justin and his friends on the beaches of California are swept into a thrilling and dangerous world of magic, complete with pterodactyls, sea serpents, phoenixes and sea horses, Also awakened, though, are the evil Sorcerer, benevolent Emperor and Princess who resume their ancient rivalry for possession of the power. As the young boy is drawn into their perilous battle, the entire world becomes an arena for Justin's good magic and his Sorcerer opponent's wicked magic.

And just so you know, lest you were scratching your heads skeptically, the original source of the stories was written before Harry Potter.  So there. 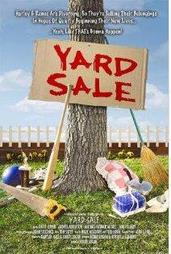 (No one ever explained to me what the founders's "vision" actually is, but I like to think it's "Someday having a world where very low-budget movies will bring peace to mankind."  But that's just a guess.)

The story tells about a young, married couple, Harley and Renee, who are getting a divorce and selling off their life together.  Unable to agree on even something this simple, they set up a competition between them for who can sell the most property.  The winner gets their cherished car.  The loser gets to walk.  As the come across various items, though, it sparks memories of their past which see in flashbacks -- not just why they're separating, but what brought them together.  The thing is, though, that we see these flashbacks in the reverse:  the most recent first building to when they initially arrived at the house.  And as we see love "returning" to their life, the question arises whether it will return, not just in flashback, but in fact.

Film Threat magazine wrote about the film, “'Yard Sale' is also one of the funniest, most affecting films I’ve seen all year...This is that rarest, most pleasant of surprises: a light slice of fluff you’ll want to share with those loved ones who don’t exactly “get” your usual brand of film. It’s a guilty pleasure, to be sure, but one short on guilt and heavy on the pleasure."

There's a lot that's quite good in such a small, low-budget production.  Not everything works, but plenty enough does.  I have been informed by company advisers to say no more.